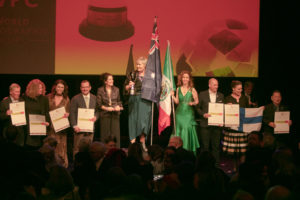 After a second place last year in the home edition, in 2019 Team Australia wins its first WPC! Second place trophy went to USA, defending champion, with Mexico in the third place. On April 8th, at the end of the celebration for the 125 anniversary from the foundation of the Norges Fotografforbund, the World Photographic Cup 2019 winners have been announced in the historical “Drammens Teater”, in Drammen, Norway.

The WPC competition is truly a global organisation unlike any other in professional photography. This year 32 national photographic teams entered the edition n.6 of this one-of-a-kind competition, from Europe, Asia, North & South America and Oceania. This was the most ever.
All individual winners, the “Best of Nation” and the top 10 teams of the 2019 World Photographic Cup (WPC), have been announced and presented with their awards. The Ceremony has been broadcast online and watched from around the world.

Gold medal winning images
Individual gold medals for the 6 categories of the competition went to photographers from Australia, Finland, Malaysia, Mexico and USA (2), with Canada, Czech Republic, France, Portugal, Slovakia, Sweden and The Netherlands also joining the medal circle. All winning images, thanks to the WPC Gold Sponsor ChromaLuxe will be visible for 4 weeks at the Fotografien Hus in Oslo.

The pictures of the ceremony are available online too

Truls Løtvedt, President of Norges Fotografforbund Association of Norway, Host Event Country and FEP President said: “What an outstanding performance from the Australian team this year! Wonderful images resulting into a well deserved 1st place. And what a great event in prestigious Drammens Teater, honoring all the winners in a fabulous way. We, the Norwegian association NFF, love having been chosen to host this incredible competition award ceremony, and look forward to competing for the WPC again the coming years. Well done, Aussies!”

Giuseppe Scozzi, WPC Chief Executive: “There is not in the world a program with photography like this, which is able to conjugate international fellowship and national pride, and moreover respect for professional photographers worldwide”. The WPC CEO also thanked the Norges Fotografforbund for having organized such a beautiful event, and announced that the dates and venue of the next WPC announcements will be announced in a very short while.