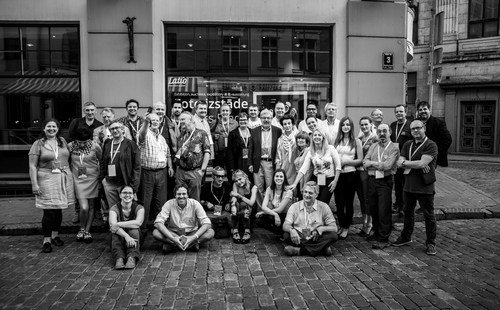 PICTURE FROM RIGA 2014, MADE BY YURIS ZALESKIS SUR Competitions

The FEP will announce and present the finalists and winners of the FEP European Professional Photographer of the Year Awards 2014 at Photokina, on September 18th.  The winners will be awarded with the European Golden, Silver and Bronze Cameras. Within the 6 Golden Cameras winners, the FEP will announce the overall winner, who will be claimed the FEP Professional Photographer of the Year 2014.

Entries will open on October 2014.  NEW! It would be possible to enter  each of the 6 categories with an unlimited number of pictures, and the aggregate scores of the top 3 will being considered for the awards.

Registrations will open from September 1st 2014. FEP welcome the coming second edition of this unique competition wishing every success to all the teams of Europe!

FETA Dead line for submission extended up to August 31st

EP  Registrations are open!  the fully on line FEP basic qualification is now up and running.

QEP/MASTER QEP   Pre-registrations for the next session will open since August 1st  up to the end of October .

Video Qualifications  NEW !  The FEP Board agreed to introduce a new set of FEP EUROPEAN QUALIFICATIONS FOR VIDEOGRAPHERS. This has been considered a way to save the business for the individuals and to attract new young membership for the associations. The project will go ahead with Neil Warner as Chairman for two years and the aim to have the first round of FEP video qualifications in Spain at the end of 2015.

November 29-30th, and December 1st: A  QEP session will be held in Rome, Italy, on. It will be followed by a FEP Board meeting . Meeting will be held in the central located  Studio Orizzonte, owned by Antonio Barrella, in cooperation with the IED (Istituto Europeo del Design).

14-16th February 2015: FEP International Photo DAYS –  The FEP Board sponsored the realization of such event in Trieste, Italy.  The handling out of FEP awards 2015 (February 15th) and the annual FEP GA meeting (February 16th) will take place in the same venue.

15 April 2015 : World Photographic Cup 2015 presentation,  aside the GNPP National Congress, at Montpelier, France.  Next WPC awarding ceremonies are already scheduled in 2016 in Australia and in 2017 in Japan.

FEP also received options to have a QEP session in Poland in June 2016, and a second session in The Netherlands, November 2016.