FEP European Professional Photographer of the Year Awards 2010Supported by Epson The overall winner of one of the worlds most important professional photographers competitions is now official.André Boto won with his wonderful images.“Winning gives me the motivation needed to continue the creativity and do something “outside the box” that really makes the difference. The point is not only to be different. We should be different but at the same time be different with something that makes sense. This work and my style reflects a little of my artistic background. I have some arts connection since childhood and I grew up with it. The Surrealism is an inspiration of my actual authorship work. I like the challenge of creating “something” that we maybe could see in the real life, representing dreams and make people thinking and dreaming.”, says André Boto with a smile.The winners were presented at Epson Stand at Photokina 2010.EPSON representative, Claes Jeppson, who presented the prizes said “EPSON is proud to be able to support a competition like this, where talent is shown so clearly. EPSON and the photographers need each other to make and present images at a high level”.To this FEP President Neil Warner thanked EPSON for the support and remarked that it was a joy to experience images like this. 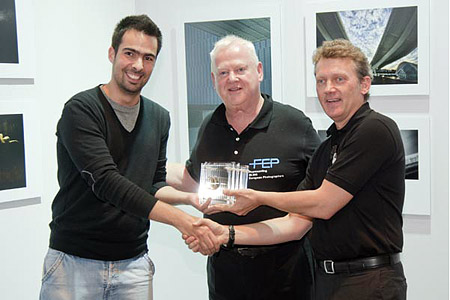